Soft is at the center 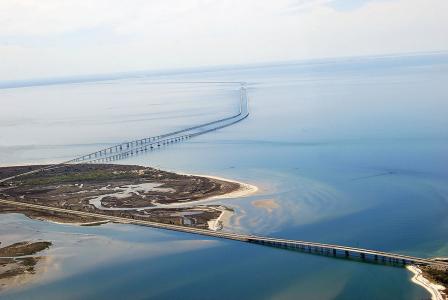 When it opened in 1964, the Chesapeake Bay Bridge-Tunnel was considered one of the seven engineering wonders of the modern world—incorporating two-lane bridges and tunnels for vehicular traffic to get from southern Virginia to the Delmarva Peninsula in Delaware.

The 17.6-mile vehicular toll crossing of the lower Chesapeake Bay is a north-south highway and provides the only direct link between Hampton Roads and Virginia’s Eastern Shore.

In the 1990s, parallel bridges were added along the crossing, which are connected by two nearly 1-mile-long two-lane tunnels beneath the Thimble Shoal and the Chesapeake navigation channels. Now, more than a half century after the original “engineering wonder,” a project to build a parallel tunnel in the Thimble Shoal Channel will continue that tradition of modern marvel and innovation.

The Chesapeake Bay Bridge and Tunnel Commission (CBBT) broke ground in September 2017 to build its new tunnel. Unlike the original tunnel, which was constructed as an immersed tube tunnel, the parallel line is using a tunnel-boring machine (TBM). The project has an anticipated total cost of $810 million, according to CBBT Executive Director Jeff Holland.

“This type of construction is not as common in soft ground, and is only recently coming into use in the U.S.,” said Ryan Banas, P.E., CCM, project manager at HNTB, who serves as the construction management consultant. “It’s a harsh environment. It’s at the mouth of the ocean and out on the water. But it’s a vital link for the region that it serves.”

Dragados USA Inc. and Schiavone Construction Co. LLC submitted the lowest bid of $756 million using the bored tunnel method. The boring machine is currently being built and will be delivered to the site in several large pieces. Those pieces will be assembled at the bottom of an excavated pit at Island 1, where construction has started.

The TBM is expected to be delivered by late 2018, with boring construction beginning in spring 2019, Banas said. The 300-ft-long TBM will use a 42-ft rotating head to cut into the sandy soil. It is expected to bore 50 ft a day.

As the TBM excavates, an estimated total of 500,000 cu yd of soil will be brought back to Island 1 for removal. At the same time, about 9,000 precast concrete tunnel segments will be delivered to the TBM, which will precisely place the segments as it progresses. After the TBM reaches Island 2, it will be disassembled and removed.

Once the tunnel liner is completed, then the final roadway, lighting and mechanical systems will be installed. The entire project is expected to be complete by fall 2022.

“Tunnel boring machines have been around for a long time,” said Mike Crist, CBBT’s deputy executive director of infrastructure. “That’s not a new technology. The real change over the past 15 years is the ability to do TBM in soft, silty clay material underwater.”

TBM technology is typically used for hard rock tunneling. The Channel Tunnel, or “Chunnel,” from the U.K. to France used the TBM method, he said. The 10 other tunnels that have been constructed in Hampton Roads have all been completed using the immersed tube tunnel method. 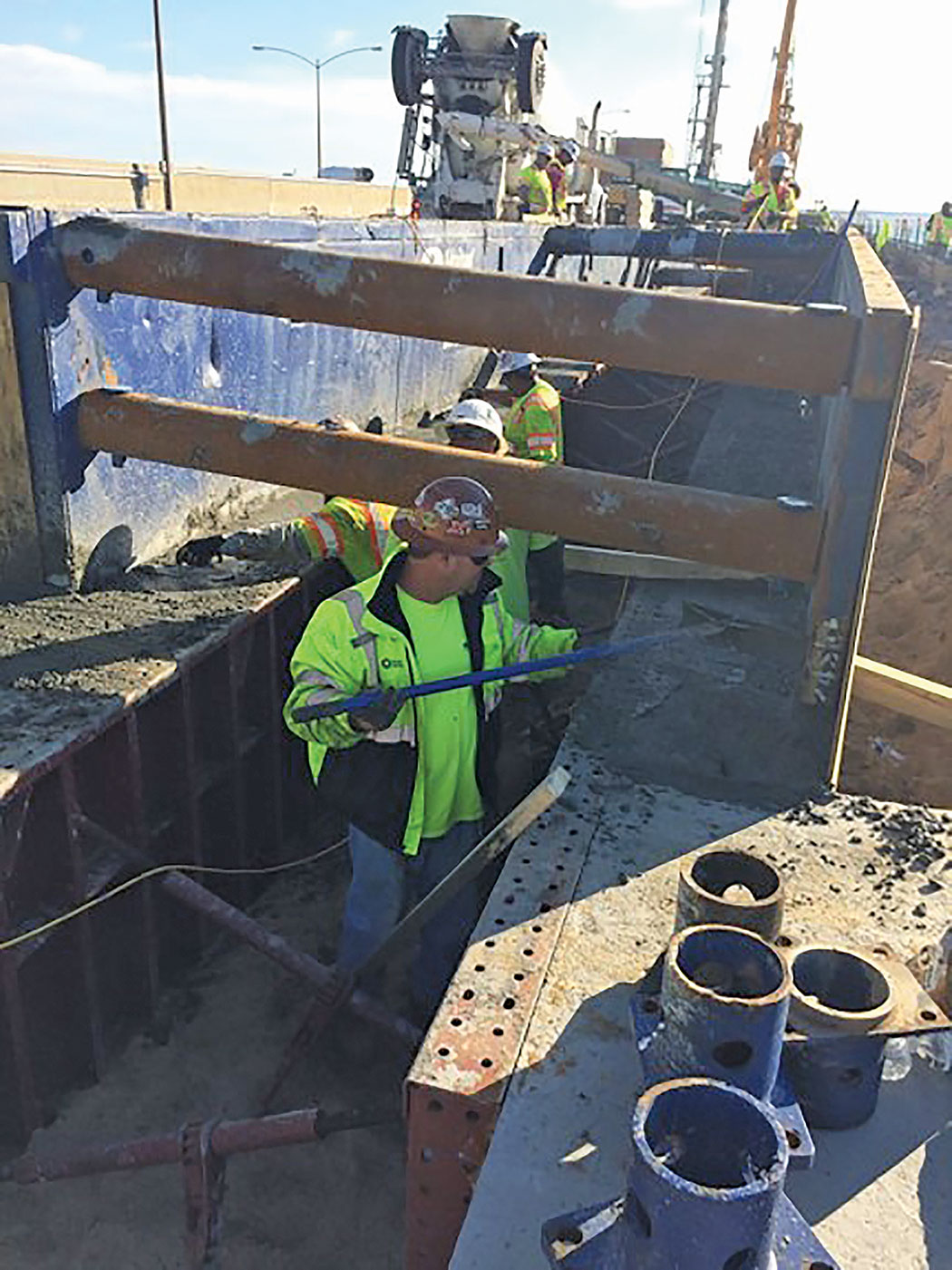 The CBBT Commission broke ground in September 2017 to build its new tunnel. The project has an an anticipated total cost of $810 million.

On an annual basis, the Chesapeake Bay Bridge-Tunnel sees 4 million vehicle crossings, Crist said. That is about 11,000 vehicles per day. “Not a huge number compared to other tunnels,” he said, “but that number is kind of misleading.”

During the peak summer season, daily crossings increase to 25,000 vehicles. Because traffic is funneled back to a two-lane tunnel for the underwater crossing, delays are common, he said. The tunnels are shut down during an accident, or a crossing by a wide-load vehicle or a truck with hazardous materials, causing further delays.

Besides improving traffic flow, the new tunnel will increase safety, offering additional lanes during routine tunnel maintenance or as an alternate route during an accident or other closure.

The CBBT District, governed by the CBBT Commission, was created as a political subdivision by the Commonwealth of Virginia in 1954. The district is comprised of six cities: Virginia Beach, Norfolk, Portsmouth, Chesapeake, Hampton, Newport News, and the two Eastern Shore counties of Northampton and Accomack.

CBBT plans to pay for the parallel tunnel through a variety of means, including the sale of revenue bonds, the district’s general fund, and several loans, including a $50 million loan from the Virginia Transportation Infrastructure Bank and a $321 million Transportation Infrastructure Finance and Innovation Act loan, Holland said. No tax dollars are being used for the project.

CBBT expects to add a parallel tunnel at the Chesapeake Channel, but not for another 20 years, Holland said. “That project is four miles north [of the Thimble Shoal Tunnel]. We anticipate we will start that in 2037.” 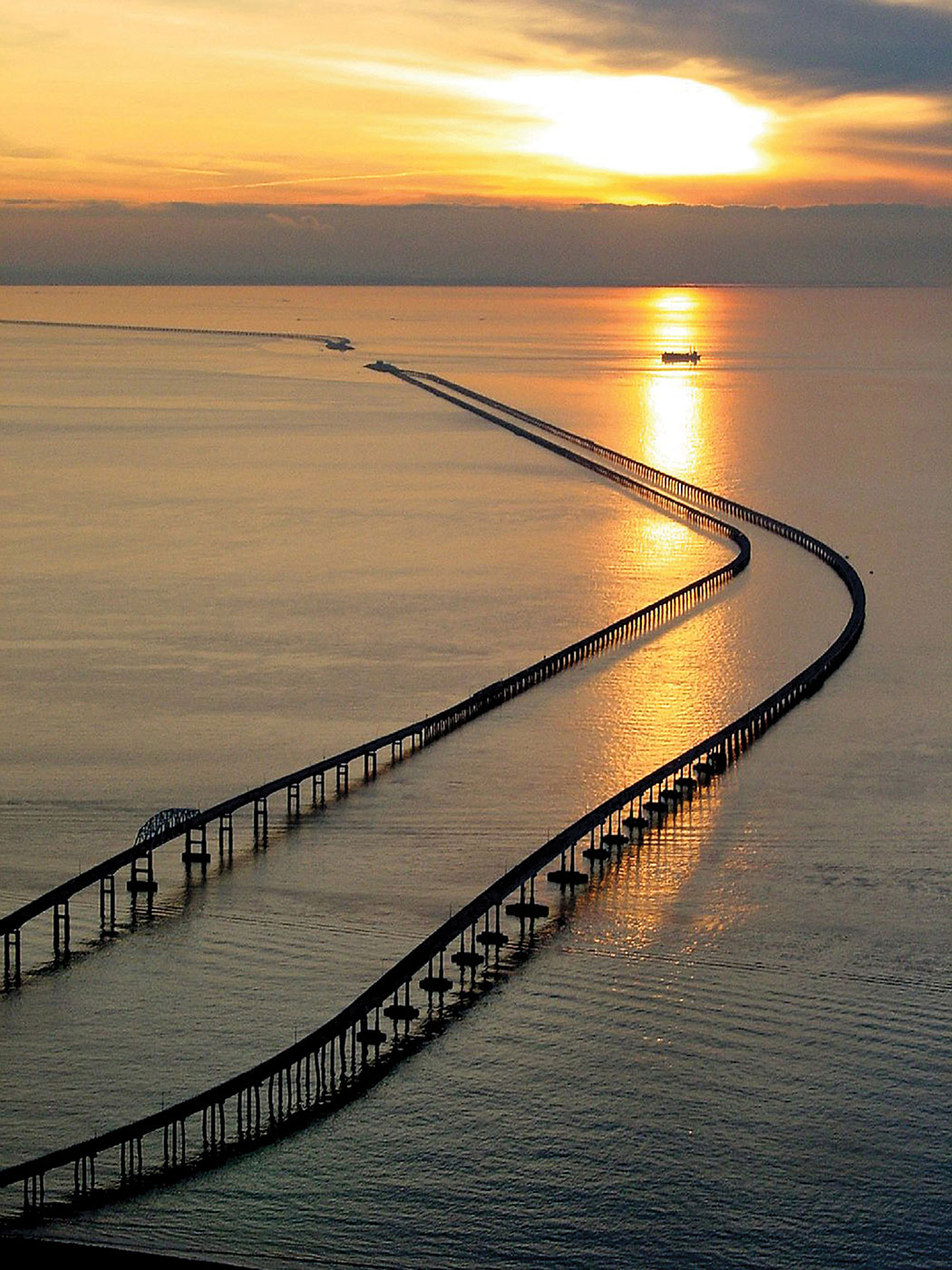 The 17.6-mile vehicular toll crossing of the lower Chesapeake Bay is a north-south highway and provides the only direct link between Hampton Roads and Virginia’s Eastern Shore.

Typically, in a tunnel section like this, contractors would use a massive steel-reinforcing cage to give the concrete segments structural strength and resistance to flexure until they are placed and compression takes over, said Kevin Abt, CBBT parallel tunnel project manager.

The steel fibers are replacing the standard reinforcing steel cage that have been used in the past inside tunnel segments. Rather than using the steel cage for reinforcement, the steel fiber will be distributed throughout the segments, he said.

“That gives it the structural strength you need so you can manipulate it after [the segments] have been made,” Abt said. “It’s never been done before in the U.S. on a tunnel of this diameter. It’s very forward-reaching.”

The ability to manipulate the segments is even more important as builders will deal with the location of the project—the Atlantic Ocean.

“We’re building it in the middle of the ocean,” Abt continued. “Building a tunnel under a river, you don’t have to worry about the waves coming 20 ft up onto the equipment, but here we do.”

The use of steel fiber in the precast concrete tunnel segments also is expected to decrease the service life costs of the project, Banas said.

The use of steel fiber “could significantly cut costs not just for CBBT, but for other projects in the U.S.,” Banas said. “This could have much further-reaching impacts. It could have impacts throughout the country. We’re setting the precedent. Other agencies will be able to look at what we are doing for their future projects.”

In fact, they already are, Crist said. Because of the parallel Thimble Shoal Tunnel project, the Virginia Department of Transportation is currently in the procurement process for the Hampton Roads Bridge Tunnel expansion and is considering the TBM method as well, he said.